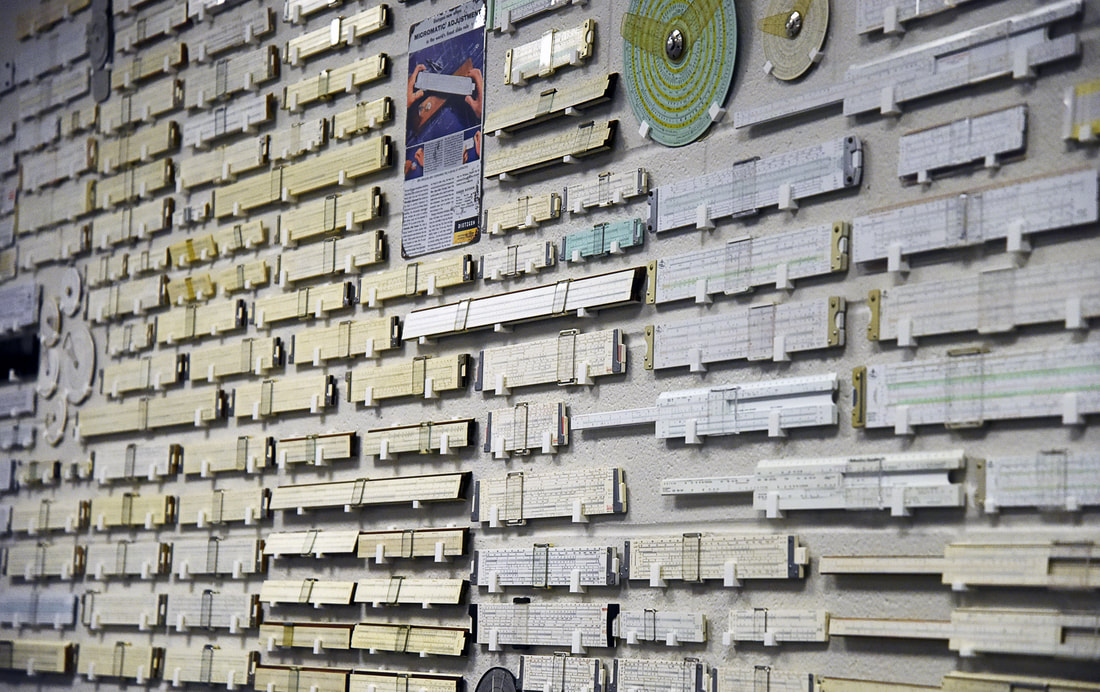 My slide rule collection on full display in my classroom.

With two rulers, who needs a fancy calculator to add numbers?   Clearly, from the image shown at right...

This works if all the major divisions are counted by ones (in inches or centimeters, doesn't matter).   If you wanted to add bigger numbers, you could either extend the scale OR you could mentally add 10 to the existing numbers.   For example, instead the above rulers could read 13 + 4 = 17 or 13 + 14 = 27 just as easily as 3 + 4 = 7.   And if you want to add numbers to something other than a 3, you just SLIDE the rulers.    As such, this would be a slide rule ​for addition.
Now, how might you multiply numbers?   Once again, let's look at these rulers...

Thinking in this way, where a major division on the rule is always double the previous mark, you could then fill in the gaps between the divisions in order to multiply numbers other than multiples of two.  For example, if half-way between 2 and 4 on the pink rule represents 3, then notice, shown at right, how 4 x 3 would line up with the midpoint between 8 and 16 on the upper rule.   This number, 12, of course being the product of 4 x 3.  From this we can also see that...

At that point, the numbers 5, 7, and 9 are the only missing whole numbers we need to place on our rulers (as midpoints) in order to do any multiplication we'd like.   And if we construct these rulers in a way that let's them slide against each other, then we can make our own slide rules quite easily.

This idea of laying out the rulers in such a way, as logarithmic scales, is the fundamental basis for every slide rule we know.   For more depth on "logarithmic scales" and the math behind them, please see this link here.

Now these images of rulers with stick-on numbers provides nothing in the way of accuracy, but you can begin to see that if we properly manufactured the scales with very fine, often etched marks...and if instead of going to 64 on the scales and only went to the number 10, with divisions spread across the entire ruler, then we can greatly lift the precision of the computations to as many as 3 significant figures on most slide rules.
Division works in reverse, of course.   Using the last image, to divide 6 by 2 (or in this case 60 by 20) you'd just read the answer under the 1 of the C-scale (called an "index").   Note that 9 divided by 3 and 7.5 divided by 2.5 are also 3!

On almost any slide rule, you will find these C and D scales which exist to perform the operations of multiplication and division.   From there, you can create over scales that do a variety of functions.  For example, I could square all the numbers on the D-scale and create my own "squared scale," which is typically the A and B scales on a slide rule.   I could cube the values on the D-scale and produce a cubic scale, which is typically the K-scale on most slide rules.   Using these squared or cubic scales in reverse would give you the ability to compute roots of numbers.  L and LL scales typically allow for performing exponentials and logarithms of numbers.  S and T scales will let you get the sine and tangent of angles listed on those scales (read off on the D-scale).   Inverse (denoted with an "I" in a scale name) and folded scales ( denoted with an "F" in a scale name) allow you to perform inverse operations and higher precision computations respectively.

There are a variety of typical ways that all of these popular scales are laid out on a slide rule, which include Rietz rules, Mannheim rules, Darmstadt rules, and Yokota rules.   And because there might be a need to do advanced math, engineering, electronics, chemistry, business, and unit conversions using the same type "technology," then it opens up a world of variety when it comes to slide rule design.    Basic rules with only the A, B, C, D, K, S, and T scales likely only require room on the front of a slide rule, leaving space on the back for a listing of formulas.  This is known as a simplex design.  But when you fill up a rule with more than 30 scales of a variety of powerful functions, then a slide rule might have scales on both front and back of the rule, which is referred to as a duplex design.

But fundamentally, if you begin by learning to use the scales of a slide rule to do basic arithmetic, then you can branch out into a universe of possibilities when it comes to slide rules, which is why they are so awesome to use and collect! 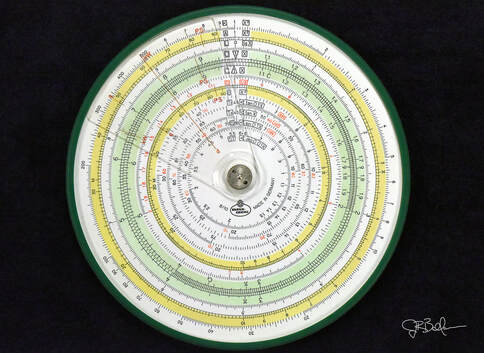 Given the wide range of functionality in a slide rule, there is an enormous range in which we could categorize them.   However, here, I choose to    organize them in three ways...by maker, by function, and by design.

The portfolio - featured rules in my collection - below shows the major makers of slide rules by which my catalog will be organized.  A full-page will be devoted to each maker, whereas the "Miscellaneous" category will be of slide rules of which I have very few OR a merely makers that I know too little about to devote the time and energy to a full page.

Within each maker page, the rules will the be organized by their function, which is typically for "general-purpose" math or for a "specialty" use.  General-purpose rules are those that let you do math, and they range up in capability depending on their complexity and number of scales.  The same could also be said about specialty rules; however, their focus is on a general task, such as electronics, chemistry, military, and any number of strange and delightful purposes.   The specialty rules (at least those of my focus) usually allow the user to do most math computations, coupled with a scale or three added added utility in its intended discipline.

Finally,  once categorized by function, the slide rules will be listed by design.  The popular designs of slide rules are typically linear (like a ruler), circular (like a [ahem] circle), and cylindrical/spiral.   The latter type of rules have prohibitive costs, so there are naturally fewer such rules here, though I am not devoid of possessing a few!

Each rule will have glamor shots (taken by me) and a list of specifications.  I will also include my own thoughts about the slide rule itself. 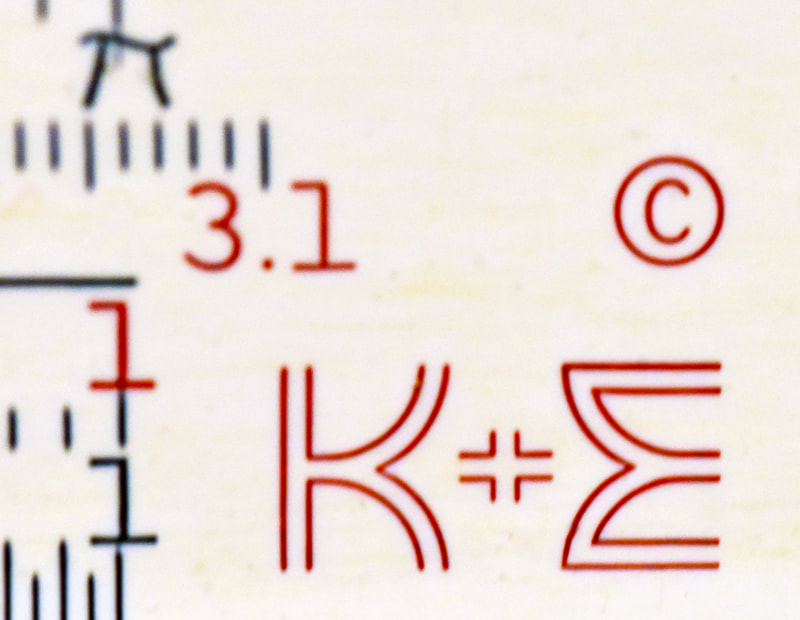